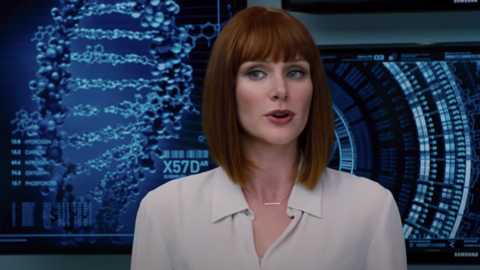 Bryce Dallas Howard, one of the stars of Universal’s Jurassic World movie series, has commented on how she earned substantially less money than Chris Pratt in the dinosaur movie franchise. She also spoke about how Pratt helped her earn more for merchandising deals to help make up for the film pay gap between the co-stars.

In 2018, it was reported that Howard made $8 million for Jurassic World: Fallen Kingdom, compared to $10 million for Pratt. Howard told Insider, however, that the pay gap was bigger.

“The reports were so interesting because I was paid so much less than the reports even said, so much less,” Howard said. “When I started negotiating for Jurassic, it was 2014, and it was a different world, and I was at a great disadvantage. And, unfortunately, you have to sign up for three movies, and so your deals are set.”

Howard went on to praise Pratt for helping her get equal pay on deals outside of the films for projects like video games and theme park rides.

“Chris and I have discussed it, and whenever there was an opportunity to move the needle on stuff that hadn’t been already negotiated, like a game or a ride, he literally told me: ‘You guys don’t even have to do anything. I’m gonna do all the negotiating. We’re gonna be paid the same, and you don’t have to think about this, Bryce,'” Howard said. “I love him so much for doing that.”

Howard said Pratt’s intervention helped her earn a good deal of money, more than she made working on the films themselves.

The latest Jurassic movie was June’s Jurassic World: Dominion, which made $974.5 million at the global box office. It’s the No. 2 movie of 2022 thus far, only trailing Top Gun: Maverick ($1.34 billion).