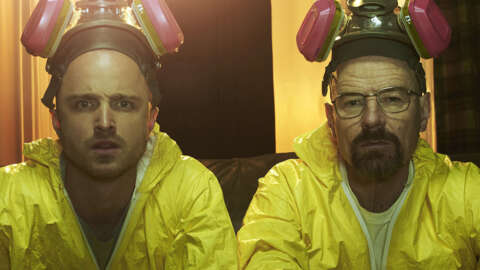 The next episode of Better Call Saul is titled Breaking Bad, according to Canadian TV listings site TVPassport. Although AMC’s official site for the series doesn’t contain yet reflect this for Episode 11, the network confirmed to The A.V. Club.

A synopsis for the episode reads: “The partners escalate their enterprise to new levels.” Although the title and description strongly suggest this is undoubtedly the return of Bryan Cranston and Aaron Paul as Walter White and Jesse Pinkman–we obviously won’t know for sure until the next episode airs August 1. Paul confirmed they were coming back earlier this year, while also noting that their return was supposed to be a surprise.

“We were asked to keep it a secret forever,” Cranston told the Albuquerque Journal. “We were flown in under the darkness of night. We took this plane and they went to a certain private section of the airport there. And then we took like two steps out of the tarmac and into an SUV. They move us to an Airbnb–a duplex. He had the top floor. I had the bottom floor and we were told you can’t leave.”

The pair stayed in the duplex for four days, leaving only to film. AMC went to these extreme lengths to keep their return a secret until suddenly they didn’t in April–when the network tweeted it out, and showrunner Peter Gould confirmed.

As Paul told the Albuquerque Journal, “It’s so funny that because this was supposed to be a big surprise, a big secret. Then all of a sudden they announced that we were doing it, so why did they keep us in a prison? Seriously, they were just messing with us.”